I haven’t had much of a chance to write lately because I’ve been so busy. About a week and a half ago, I got a text message from my strongman coach Chris Rider. He quite simply said, “did you hear the news?”

“???” I replied getting a bad feeling in the pit of my stomach.

He told me Bud Jeffries had passed away. I was in literal shock. Bud was a man who literally redefined what was considered impossible. A man who would do one arm clapping push-ups at over 300lbs, dead squatted a 1000lbs (picture a squat where you crawl underneath the barbell before standing up, did full splits and swung a 53lbs kettlebell for about an hour straight.  His odysey of working up to swinging for an hour straight burned over a hundred pounds of fat off of him.

Reading his books influenced many of the tougher sessions I’ve put my personal training clients through, particularly when it came to long kettlebell swing sessions and training heavy partials.

Lately, he’d been creative doing things like pressing a heavy kettlebell overhead while throwing a flaming ax on fire at a target.

“How could this be?” I thought. He was carrying a refrigerator over his head with one hand literally the day before it happened.  Here is the link.

I knew of Bud because I had read about him in Pavel Tsatsouline’s books so he was like a comic book hero come to life.  But I didn’t actually meet Bud until a couple years later when he caught wind that I was an up and coming strongman.  When he was traveling through my area, he invited me out to one of his school assembly shows to see how he does them. I actually keep a clause in my contracts today so that I can do the same. 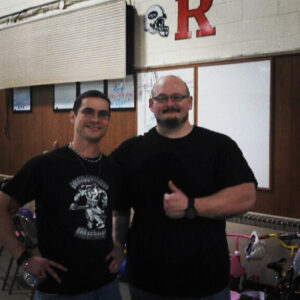 It was literally just a couple days after I did one of my shows and showed the difference between a garage band with potential, and Metallica.  Man he was good.  He was smooth, polished, had the kids watching his every move.  He set the standard that I would attempt to live up to, and showed the potential to do something amazing.  At over 1000 performances in 44 states, he inspired countless youth.

Bud had caught Covid back in December and though he was better, the theory is it was complications of that which eventually got him.  Still shocking because if anyone was going to be kill proof it should have been him.

I guess the only bright spot of this is that he can now be with his son, who passed away a short time ago from being in motorcycle accident.

Bud’s passing also provides a lesson.  Live up to your greatness, each and every day.  It’s what he did and you never know when it might be your last.

Eric Moss is a personal trainer in Boonton and moonlights as a world-record-holding modern-day professional performing strongman, author, and motivational speaker. In the tradition of the strongmen more common during the turn of the century, he performs feats of strength such as bending steel and breaking chains as part of a show and speaks on goal achievement for corporations, associations, nonprofits, government entities as well as for schools and universities. His exclusive personal training studio is located on Main Street in Boonton New Jersey, is close to Mountain Lakes, Denville, Montville and Parsippany New Jersey.