One of the things that my personal training clients have access to is me as a support system to give guidance, even when they aren’t in my studio. Knowing this and using me as a trusted resource one of my people asked if I recommend a treadmill for home use for his wife. 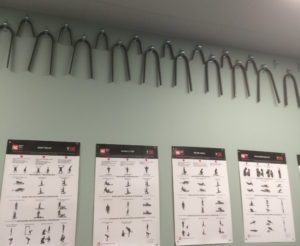 I don’t for a couple different reasons.  For one thing people buy them with the best of intentions, but it often becomes something that people later label as “an expensive coatrack”.  You see, standard gyms have a drop out rate of around 70% within 6 months the reasoning behind which is usually one of a handful of reasons.

Either people don’t know what to do (lack of guidance though I don’t think this applies to treadmill use since it’s pretty straightforward) are frustrated with a lack of progress (your body adapts to what you are doing, and in the case of a treadmill, the only real progression is to do it faster or if you have a fancy pants one increase the incline).

Another is the potential for injury. When I applied for insurance in my last facility, they had asked me if I had any treadmills and for good reason, they seem safe but there is inherent risk. Just check out this montage of treadmill fails.

And there are dozens more on youtube where that came from. And yeah, you can connect a safety strap to turn it off if you lose your footing, but let’s get real, nobody does that.

Another is a lack of consistency from a lack of accountability.  Here’s how it happens, you start out on a program filled with vim and vigor, but life gets in the way and you start to fall off track.  One skipped session becomes two, two becomes four and the next thing you know months and months have gone by and the only thing on your treadmills are your coats and shoes (hence the expensive coat-hanger bit.)  In fact one of the biggest reasons people hire personal trainers in the first place is to simply have someone there waiting for them to keep them consistent on track.  The treadmill doesn’t care if you use it or not, hence no social pressure keeping you consistent.  Consistency is critical to success.

So what do I recommend instead?  Well, for one thing and here’s my pitch, if you are looking for a personal trainer in Boonton Township or Mountain Lakes come take my trial membership.

If you aren’t and want to get healthy, then pick up a set of kettlebells and get a Strongfirst, RKC or FMS instructor to assess you and teach you the basics.  There are so many things you can do with them, they take up very little space, train things that running can’t, don’t cost much and never break.

The swing is king. It trains cardiovascular conditioning, strength and is joint friendly when performed correctly.

Now let’s say you are the type that is self motivated and wants to specifically be a runner.  That’s great, but running on a treadmill, and actual running though they seem the same in actuality aren’t.  It has to do with you moving across a surface rather than the surface moving beneath you.  That and it locks you into both a predetermined pace and predetermined stride length, neither of which are right for your body.

Solution for that is to simply get outside and run.  What happens next is up to you.

Posted in training philosophy | Comments Off on Treadmills, yay or nay?

« Reflections from my Strongman act in Lake George, the foundation and the mindset
A Few Words on Fasting »