The Pug of Steel – Dog Days of Summer

A couple weeks ago, I came to my personal training studio in Boonton and found one of the dog days of summer art pieces in front of it. I was surprised since in the time I’ve been here, this was the first time it happened. As I took a closer look I saw that it was a dog fashioned as Clark Kent tearing off his outer layers and being Superman.

How appropriate, but maybe not for the reasons you think.

You see the connection between me and the man of steel are obvious. We both bend steel and a stage nickname I had for a while was Last Son of Krypton (it was a tribute to my first mentor New Jersey’s Superman the late Greg Matonick….a nick name, not an official stage name…so don’t come after me DC).

But that connection isn’t what I’m talking about.

But Superman started out as Kal El (Superman) and pretends to be Clark Kent, a meek uninteresting wimp…something he’s not. The real him is behind the glasses, and his strength was always there…just hiding.

And I feel like many of us are the same way. The training program methodology I use starts from the standpoint that we already have the power within us to lift a car off of a human, but it’s blocked behind all sorts of protective mechanisms within our mind and body.

What I do, is help them find the power that is already there…the inner Kryptonian and it allows people to be confident in their own skin, and to be themselves.

As an example Tony when I was preparing him to win Mr. Gay USA, the strength he gained in addition to his physique made him confident to be himself which is what made him win. You can read about it here Tony Ardolino’s success story

The other day, a woman popped into my studio with some questions while I was training him. When she asked him about the results he’d gotten training with me, his answer was “I no longer doubt myself.”

That’s what I’m talking about.

Matt was the same way. He was down on himself for how his health had deteriorated but as his physique and strength changed, so did his confidence in himself. You can read about Matt’s personal training success story here.

The same thing with Siddy. The strength carried over into her life so she can feel confident in herself which changed her outlook on life. Read her personal training success story here

I know I’m bragging a bit now, but last success story for this post…honestly. The very first person I trained who’s life is completely different as a result. That person is wait for it…me.

I sometimes lament on what life would have been like if I hadn’t found weight training. I’d probably be weak and lack the confidence to be myself. If you’ve ever heard my story you might know I was picked on and ridiculed as a youth. But weight training gave me confidence to live a life I would have only dreamed about, breaking the locks and chains that prevented me from living life to its fullest. 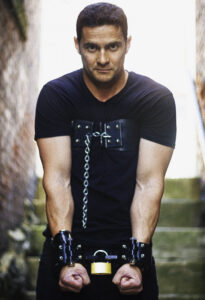 Eric Moss in locks and chains

Even when I got down on myself from a failed marriage it was strength that got me back on my feet again. I’ve got a fun career that has me showing off and inspiring thousands at a time. I’ve become friends with people I was a fan of. I’m married to a woman that I definitely would have thought she was out of my league. Life is pretty cool and it started by finding weight training and the Kryptonian within.

If you would like to find the Kryptonian within and need help, I have a free trial at my personal training studio in Boonton. Just send me a text at 973 476 5328 and introduce yourself.

UPDATE:  Apparently some of my personal training clients went behind my back and collectively adopted this for me. I’m so thankful that they did this and chose Eric Moss Fitness for all their health and fitness needs.

Eric Moss is a personal trainer in Boonton and moonlights as a world-record-holding modern-day professional performing strongman, author, and motivational speaker. In the tradition of the strongmen more common during the turn of the century, he performs feats of strength such as bending steel and breaking chains as part of a live show and speaks on goal achievement for corporations, associations, nonprofits, and government entities as well as for schools and universities. His personal training studio is located on Main Street in Boonton New Jersey and is close to Mountain Lakes, Denville, Montville, Butler, and Parsippany New Jersey.

Posted in cool stuff, learning and living | Comments Off on The Pug of Steel – Dog Days of Summer

How I’m currently training myself for strength and power

After my strongman shows I often get asked questions about how I train myself to be able to do the things that I can do. In this video I talk a little bit about it.

Training should be goal oriented. My goals are to be able to bend steel, break chains and do the other feats of strength that my shows entail, and also to be all around strong and look good. When I sit down with personal training clients, I find out what it is that they want to accomplish, then come up with a plan to help them achieve it safely and effectively.

Posted in learning and living, training philosophy | Comments Off on How I’m currently training myself for strength and power

Many times when people see these things, they ask “How?” Well as you can see, I have to push and pull, with strength and power from a variety of different angles. And yes, you need to be strong.

Strength itself is as much an art as it is a science. And the value of strength goes far beyond the bending of steel. It helps you live life to it’s fullest.

Because life is better when you live without the limits of weakness and poor health.