Jana had moved here from the Czech republic when she was 21 and had always felt good about herself when she consistently worked out.  But with the demands of running high class classical music events, being a piano teacher and numerous other ventures she got away from training consistently.

So one day she was getting a cup from Boonton Coffee in it’s new location and saw my sign from there and walked into my personal training studio.  I was training a bunch of people at the time, but keep an open door policy and was happy she walked in and signed up for the free trial.

When she came to me, she wasn’t out of shape, she just wasn’t up to the standard she held herself to.  Even going to various gyms on her own she lacked direction/consistency and wanted to get the best results she could.  She wanted to take it to the next level to live her best life.

She had a goal in mind…to have a toned body (one that is both strong and lean).  Knowing this and knowing that the best way to improve someones physique is to increase their max strength for reps, I put a plan in place to do so and do so quickly.

She promised to give me her best each and every day…and she did.

There were obstacles we faced for sure.  The tribulations of being an entrepreneur means the schedule can be stressful and unpredictable but she would find a way to get here and give me her best, many times giving me dirty looks during some of the more difficult days which always prompted a laugh. 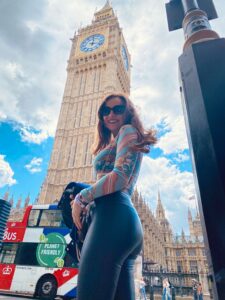 Jana on vacation in Europe living her best life

She worked the plan, and the plan worked and it worked quickly. In the 9 weeks I’ve been training her she….

Reps out with her military press starting max

…and more across the other lifts.  And people started noticing the changes in her body.  In fact, both her friend and her mom (who was visiting from the Czech republic) had asked her if she had butt lift surgery.

No surgery needed…just the right plan in place that would strengthen her glutes from a variety of angles and the willingness to do her best each day.

I just want to say it again, she achieved all of that in the first 9 weeks.

Now she’s walking around feeling good, feeling strong, feeling confident in her own skin and living her best life….and it’s just getting started.

If you would like to live your best life by getting a body that is strong, lean, fit and toned, I offer a free trial at my personal training studio in Boonton.  Just text me at 973 476 5328 and introduce yourself to get started.

Eric Moss is a personal trainer in Boonton and moonlights as a world-record-holding modern-day professional performing strongman, author, and motivational speaker. In the tradition of the strongmen more common during the turn of the century, he performs feats of strength such as bending steel and breaking chains as part of a live show and speaks on goal achievement for corporations, associations, nonprofits, and government entities as well as for schools and universities. His personal training studio is located on Main Street in Boonton New Jersey and is close to Mountain Lakes, Denville, Montville, Butler, and Parsippany New Jersey.